Lapin to report live from Barcelona as the Local Correspondent 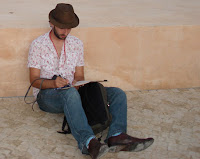 Lapin is a French illustrator, now based in Barcelona. He is a tireless urban sketcher who wanders and retraces the streets of cities around the world. In Barcelona, you can find him sitting on his small stool in Plaça Catalunya, or in any corner of the city, sketching with his markers and watercolors in an old accountant's notebook purchased at the flea market. He captures scenes with the gaze of a traveler, far from the conventional postcard style. Knowing the city like the back of his hand, he always finds a new detail or perspective for his drawings.

He has been living in Barcelona for six years, where he traces the steps of Gaudí, Domènech i Montaner, and Tàpies. He declares his love for the old and dusty quarters, but also for the most glamorous and sparkling areas of the city. And he says he can not think of a sketchbook that does not include a drawing of a dinosaur or a vintage car. 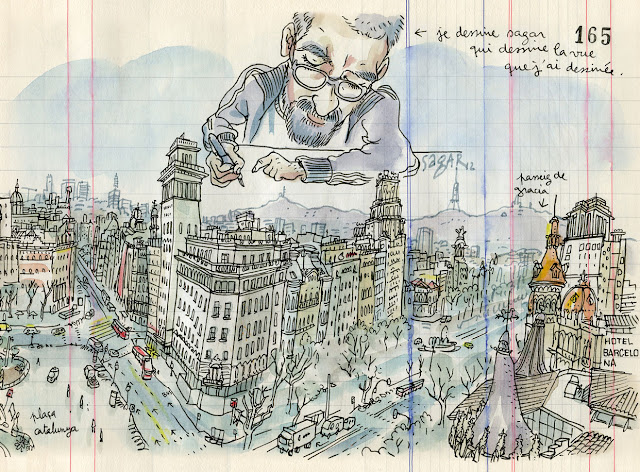 A very good notice for all Urbansketchers (like me) in the BCN Simposium waiting list.
Lapin, looking forward to see your daily drawings!
Un saludo desde Lisboa.

Mr. Lapin, That is a beautiful drawing!