On a summer day in Barcelona, you just want to spend it outside and enjoy the sunny weather. For breakfast, you will usually go to a cafeteria and order a "cafè amb llet" (latte), which is 1,50€ on average, although that price varies considerably depending on the place and the area, or a "tallat" (macchiato), which is specially popular among Catalans. 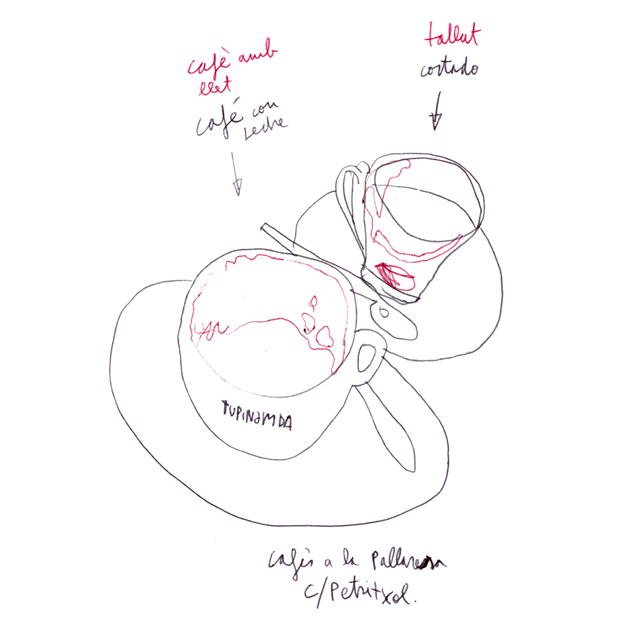 You can also have an "entrepà" (a sandwich), for which you will normally pay from 1,50€ to 5€, again depending on the bar or restaurant, the size or the ingredients. There are plenty of good places to try. This one is Silvia Xicola's favourite, a "must" hidden in the heart of the city. But there are plenty of them as you can see in "En Ocasiones veo Bares" (taken from the famous"Sixth Sense" movie's quotation "I see dead people"), the website is in Spanish.

You will normally find the menu both in Catalan and Spanish, as well as in other languages (English, French, German...) for tourists. This double marking -Catalan and Spanish- applies to almost everything -signs, labels, placards, ...- since both are official languages in Catalonia. You will also hear them both in the streets, and will probably notice a difference in their pronunciation. Below you will see an English and Spanish version of a menu, with some handwritten Catalan equivalents: 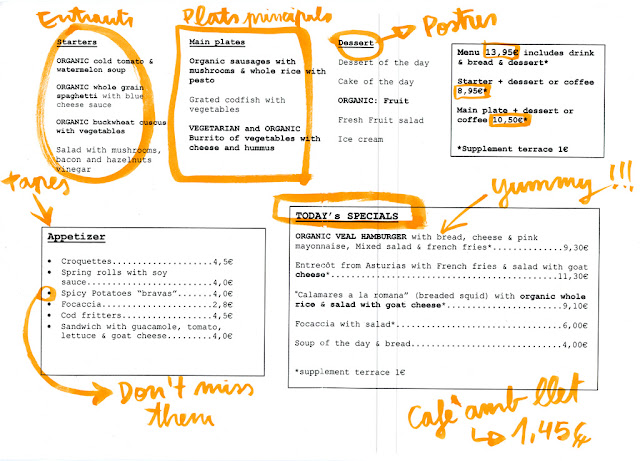 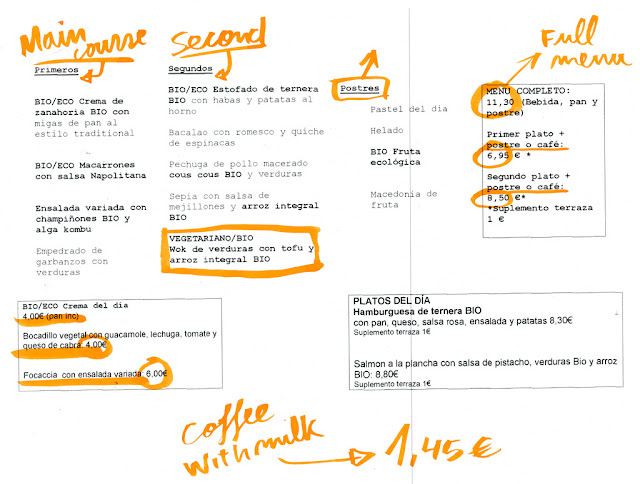 Finally, and regarding food again, for dinner you can try "tapes" (small portions of food served as snacks), usually taken at the bar counter with some drinks. They are a delicious choice. Food is served until late at night, but make sure you check the kitchen closing times in case you want to book a table in a restaurant.

I am getting hungry just reading this.

I'm looking forward to trying some tapas! (And sketch them if I remember to do so before I eat them up!)

Well, usually in front a "tapa" I can't draw I eat them up.

This is very handy Swasky - cheers.
Last year, the morning workshop instructors were asked to guide their groups to a lunch venue afterwards. Would you guys be able to provide some non-expensive venue suggestions near workshop sites for us to aim for?