Had to Be There: Drawing on Experience (Lecture C) 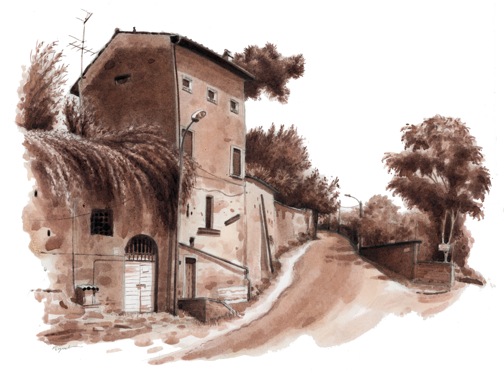 Urban sketching is an experience as well as an art. It is extra-sensory. When we sketchers sit and draw for hours on the streets, we absorb far more than the passing tourist or pedestrian. We soak up every inch of the scene, along with its sounds, smells and local characters. Urban sketchers translate their rich experiences through drawings, and through these drawings, we share not only our sights, but our insights. Some artists use their sketchbooks to mirror what is going on in their minds by drawing while facing the blank page in their studios. Whereas Urban Sketchers, by hitting the streets, use their sketchbooks as windows to the world. They are hunters and gatherers.

It is often said that every picture tells a story. However, for Fred Lynch, every picture has a story. In his talk, Fred will share not only some of his drawings, but also some of the amusing and surprising stories of the pictures, which often appear on the Urban Sketchers blog accompanied by short essays. Drawing from his two ongoing visual essays of Viterbo, Italy, and Paul Revere's historic ride from Boston, he'll show and tell the experiences he has had as an artist, and share the lessons he passes on to his students as a celebrated professor of communication art.

Fred will also bring attention to artists who have spoken volumes through their on-site work. He will inspire attendees to think of their drawings not just as exercises in rendering, but as vehicles for communication and as opportunities for inquiry and exploration

Fred Lynch is a professor and chair of the Illustration Department at Montserrat College of Art in Beverly, Massachusetts. Fred is also a professor in the Illustration Department at Rhode Island School of Design (his alma mater). In addition to teaching, he is also an illustrator, artist and active sketcher, posting regularly on the Urban Sketchers Blog. Students' work from his summer course in Italy can be seen at DrawingViterbo.Blogspot.com. Fred's drawings can be seen at http://fredlynch.tumblr.com.